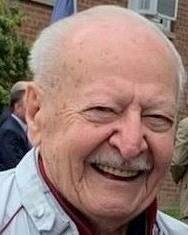 Obituary of John A Lasalandra

Please share a memory of John to include in a keepsake book for family and friends.
View Tribute Book

John A. (Hotchie) Lasalandra, 92, of Boonton, passed away on September 21, 2021 at his residence. John was born in Boonton and was a lifelong resident.

Prior to retirement John worked as an electronics wireman for Kay Elemetrics in Lincoln Park. He was a founding member of the Boonton Bears, and a member of the South Boonton Field Club. John proudly served in the United States Army during the Korean Conflict.

Letters of Condolence may be posted at danglerlewisandcareyfuneralhome.com. In lieu of flowers, the family kindly requests donations be made in John’s name to the Boonton Kiwanis First Aid Squad, PO Box 16, Boonton, NJ 07005.

John was predeceased by his beloved wife of 67 years Angelene (nee Fiorillo) Lasalandra. He is survived by his loving children Linda Makowski and John (Elaine) Lasalandra; his cherished grandchild Edward (Marina) Makowski; and great granddaughters Izabella and Francesca.