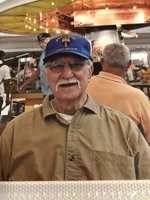 Robert Polyak of Boonton passed away on December 15th 2020, at Chilton Medical Center, after a short illness. Born in Mary D, Pennsylvania, he was a son of the late Peter and Catherine (Roman) Polyak. Robert was married to the love of his life, Linda (Trezza) Polyak for 26 years. Robert was predeceased by his brother Peter Polyak.

Robert is survived by his son, Robert Polyak, his daughter, Patricia Oliemuller (Jeff), his stepson, Raymond Scioscia (Tammy), his stepdaughter, Laura Scioscia, and his daughter Michele Febbi (Renato).  Robert (affectionately known as “Grandpa Bobby”) is also survived by 9 adoring grandchildren, Atlantia and Noah Polyak, Jeffrey and Leah Oliemuller, Raeanna and Maria Scioscia, Nicole, Alyssa and Renato Febbi, and a great grandson, Anthony Worth. He is also survived by his sisters, Anna Shultz and Helen Harahus.

Robert served in the United States Army starting in 1956, in the 287 Military Police Company, and was stationed in Berlin, Germany. After he was honorably discharged from the Army, Robert went on to serve and protect our citizens by becoming a New Jersey State Trooper for the next 26 years. After retiring from the NJ State Police, he went on to work for Federal Express at the Newark Airport in the Security Department before his final retirement.

Robert was a hard worker who believed in family and faith.  He was caring and kind, and his sense of humor was the highlight of many conversations.  He will be dearly missed.

A mass in his memory will be celebrated at

Our Lady of Mount Carmel Church

Arrangements are under the care of Dangler Lewis and Carey Funeral Home, 312 West Main Street, Boonton, NJ. Letters of condolence may be posted at danglerlewisandcareyfuneralhome.com.